The Series 7 will come in 41 mm and 45 mm size configurations, which is up from 40 to 44 mm on previous models, And the series 7 will also feature a new casing that has a flat base and softer, more rounded corners. The screen will use 50% stronger crack-resistant crystal, which is Apple's strongest ever. Apple says the narrower borders will allow the display to maximize screen area, while minimally changing the dimensions of the watch itself. The touch sensor has now been integrated into the OLED panel with reduces display thickness and borders dramatically. Apple also says that the "subtle wraparound effect" is created by refracted light at the edge of the display for a more seamless integration with the case. 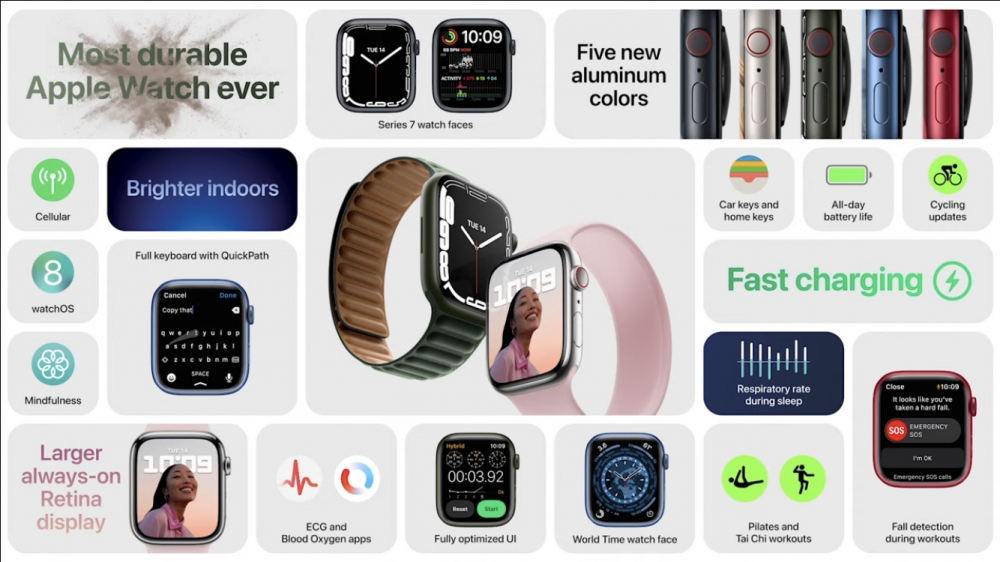 Apple says buttons have also been redesigned to take advantage of the new larger display, and an all new QWERTY keyboard that lets you tap or slide from letter to letter with QuickPath has been added.

Apple says they have completely reengineered the display in order to reduce borders by 40%. The screen borders are only 1.7 mm on the series 7, this allows for nearly 20% more screen area than the series 6, and over 50% more screen area than the Series 3. Apple has also said that the always-on display is 70% brighter indoors when your wrist is down. The ‌Apple Watch Series 7‌ also has an IP6X certification, which makes it dust and water resistant, with a WR50 swim proof resistance.

Finally, the Apple Watch Series 7 will start from $399 and will be available later this fall.